Yellowstone: A Beautiful, Yet Stinky Place.

Plug Your Noses and Open Your Eyes!  It's YELLOWSTONE!

Yes, Yellowstone is one of the coolest and stinkiest places on Earth.  As a part of a geology vacation, uh, I mean field course, we took a trip to Yellowstone National Park to study groundwater systems.  We measured discharge rates and dissolved solids.  As the water moves through the rock, it dissolves certain elements and carries them to the surface.  The water at Yellowstone is chock full of dissolved goodies, much more than the water we drink. 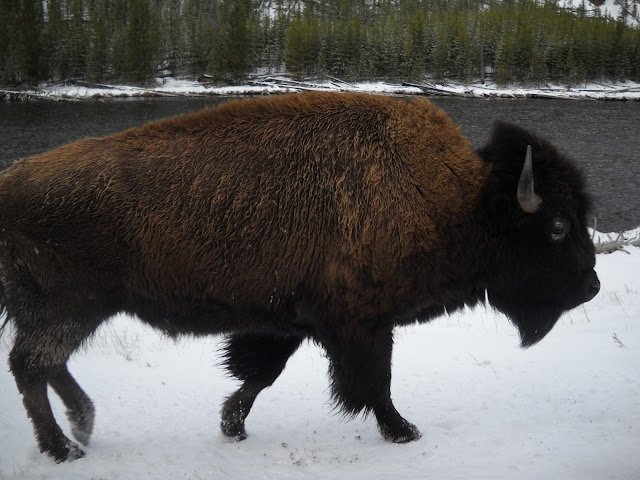 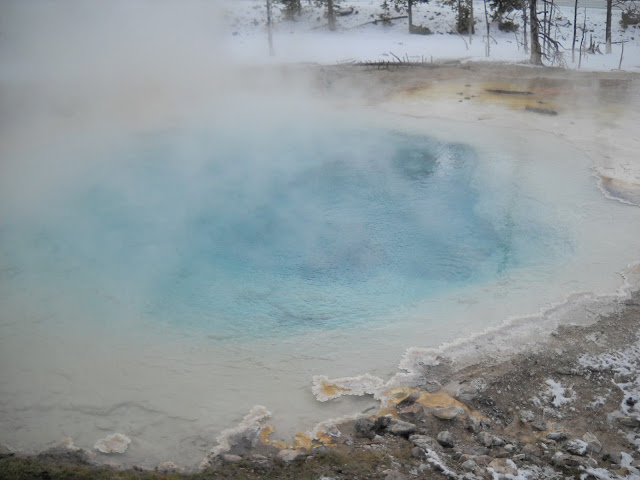 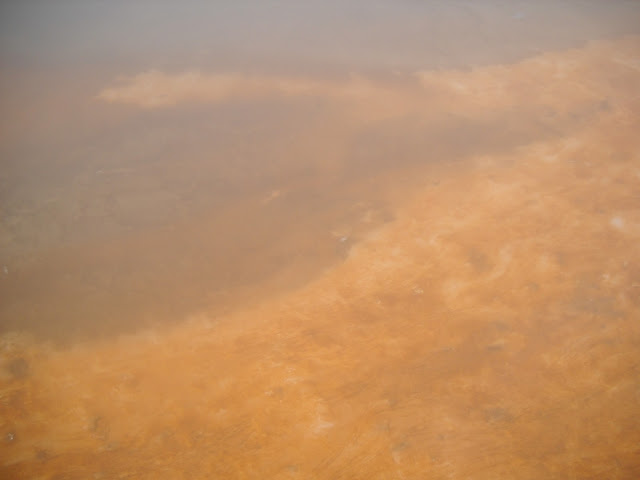 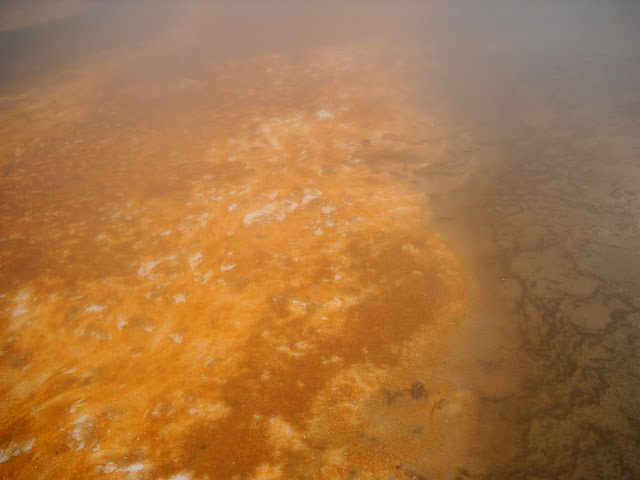 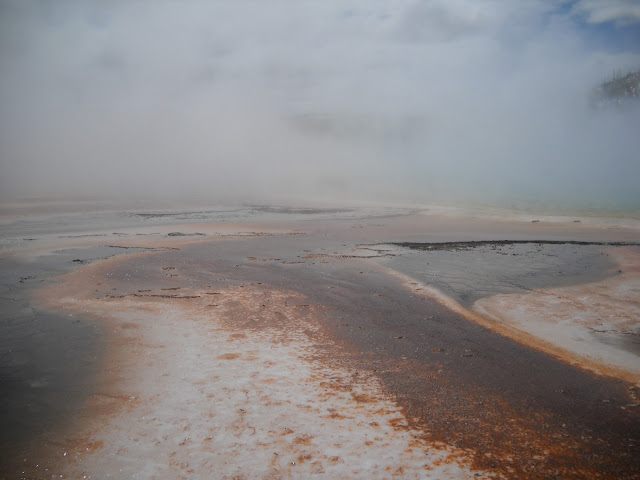 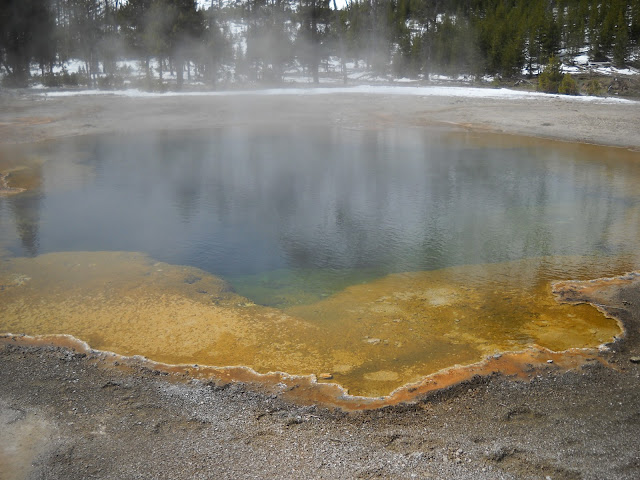 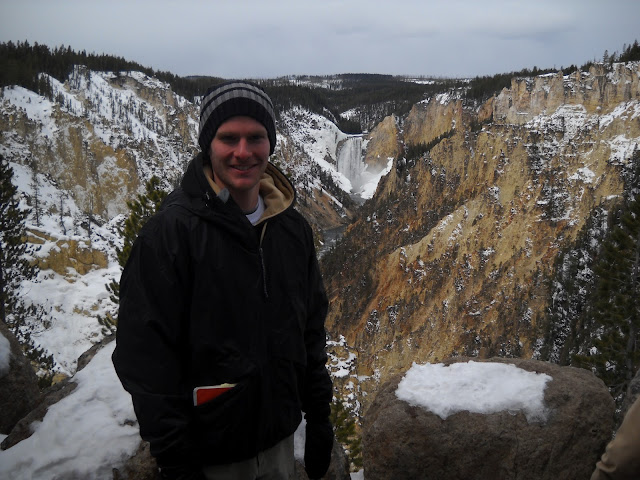 What about Old Faithful?  Well, first of all, Old Faithful isn't so faithful anymore.  We had to wait quite awhile to see it go off.  The geyser is really just like any of the hot springs in the park except that it has a constriction near the surface ( the "pipe" the water travels through gets thin).  The constriction causes pressure to build.  Eventually, the super hot water reaches the surface and its pressure drops.  This causes the water to instantly turn into steam.  Then out comes Old Faithful.  After the eruption, the pressure builds again, and we wait.  I didn't get any pictures of Old Faithful because I decided to film it.  Unfortunately, the footage wasn't too great.  So here is a picture I ripped off from somewhere else. 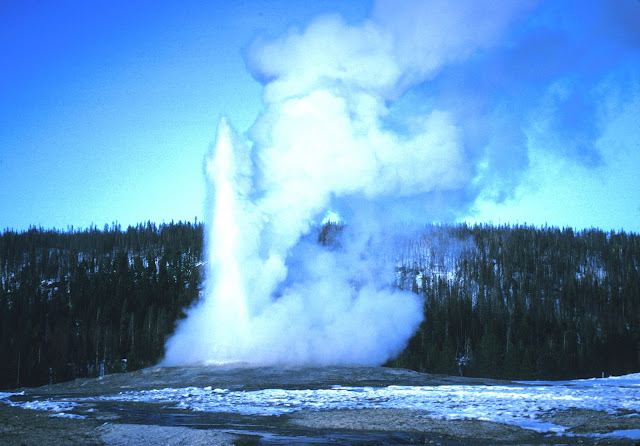 As a part of my geomorphology class, we went on a trip to Death Valley California.  It is a great place to view many surficial features like alluvial fans, salt pans, losing streams, dunes, etc.  It is such a great place for this because everything is DEAD!  There are no plants to block the geologist's view of the rocks and sediments.

So why is Death Valley so low?  It is part of the Basin and Range Province which is a part of the Earth's crust that is being pulled apart.  Death Valley has experienced both extensional (pull apart) shear and transtensional (things moving past each other and rubbing against each other) shear.  Here is a picture: 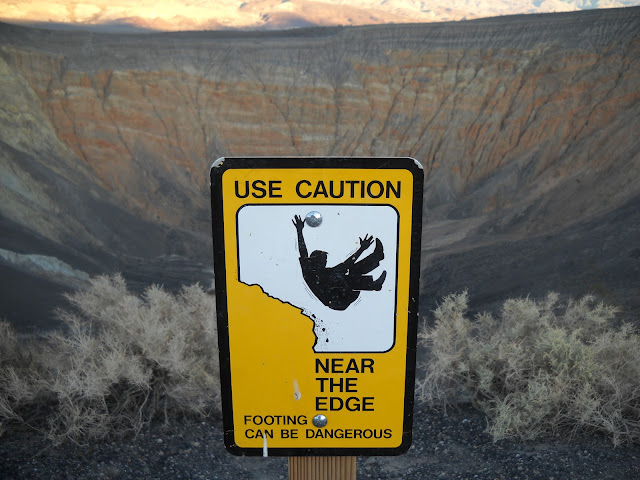 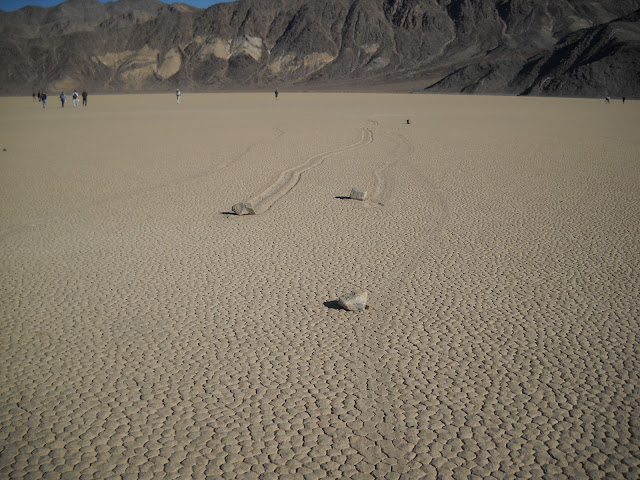 How the heck do they get there?

"The sailing stones are a geological phenomenon found in the Racetrack. The stones slowly move across the surface of the playa, leaving a track as they go, without human or animal intervention. They have never been seen or filmed in motion. Racetrack stones only move once every two or three years and most tracks last for three or four years. Stones with rough bottoms leave straight striated tracks while those with smooth bottoms wander.
The sailing stones are most likely moved by strong winter winds, reaching 90 mph, once it has rained enough to fill the playa with just enough water to make the clay slippery. The prevailing southwest winds across Racetrack playa blow to northeast. Most of the rock trails are parallel to this direction, lending support to this hypothesis.[2][3]
An alternate hypothesis builds upon the first. As rain water accumulates, strong winds blow thin sheets of water quickly over the relatively flat surface of the playa. A layer of ice forms on the surface as night temperatures fall below freezing. Wind then drives these floating ice sheets, their aggregate inertia and large area providing the necessary force required to move the larger stones. Rock trails would again remain parallel to the southwest winds. According to investigator Brian Dunning, "Solid ice, moving with the surface of the lake and with the inertia of a whole surrounding ice sheet, would have no trouble pushing a rock along the slick muddy floor."[4]
A more recent theory[5] is that ice collars form around rocks and when the local water level rises, the rocks are buoyantly floated off the soft bed. The minimal friction allows the rocks to be moved by arbitrarily light winds.[6]" From Wikipedia.

Well, I've got to be honest, Death Valley is most interesting while sitting at home if you are not a geologist or geomorphologist.  I had a blast, but, well, I am a geologist.  The pictures are cool.

Brats, and I don't mean children.

Several years ago I found myself on a field trip in southern Missouri, northern Arkansas, and eastern Oklahoma with none other than Arnold Bouma the turbidite man.  The Bouma sequence is named after him.  Here are a few photos of turbidites that can be viewed on road-cuts, quarries, river bluffs, and dams.  You can't see the rocks anywhere else in the Midwest!  Too many dang-blamed (beautiful) trees!

Turbidity currents are a type of hyperpycnal density current that contain high amounts of suspended sediment.  The density difference between turbidity currents (higher density) and the surrounding water allows the current to move sediments great distances over short periods of time.  The gradient does not necessarily need to be very steep.  The resulting deposit is termed a turbidite.  Coarser particles settle out of the current before finer particles, which results in a normally graded (coarse at the base, finer grained at the top) deposit.  The Bouma “sequence” (1962) shows this deposit as representing five phases of settling, labeled a-e.  The “a” interval is a unit with commonly occurring scour marks and flute casts on the base.  The flow is extremely turbulent in this phase.  Coarser particles tend to settle out before finer particles.  This results in a fining upward of grain size.  Interval “b” consists of parallel lamination from the upper flow regime.  Interval “c” contains new bedforms commonly showing ripple lamination.  Interval “d” displays a second phase of parallel lamination from the lower flow regime.  Finally, interval “e” consists of the finer particles that settle out only after the current has passed.  Some layers (commonly d and e) may be missing due to erosion by subsequent turbidity currents. 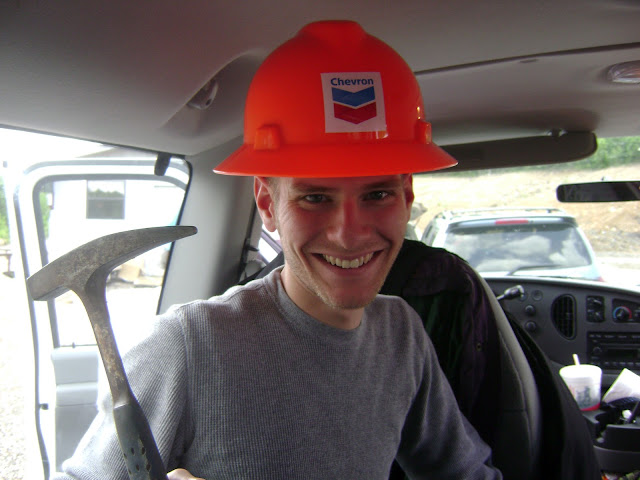 Deep Sea Canyon Fill. Deep sea canyons are a typical path for a turbidity flow. Shock caused by tectonic movement often starts the flow. Flows usually travel through a canyon very quickly because of the steep gradient. Intra-canyon deposits typically spread laterally from wall-to-wall. The characteristic lobes that are so common in submarine fans are not present in the canyon itself. Due to the frequency and intensity of the flows inside the canyon, the finer layers of sediment are commonly stripped away by subsequent turbidity currents. This leaves only a small amount of mud preserved in the rock record.

Deep Sea Fans. Submarine fans spread out from the mouths of the canyons that feed them. Turbidity flows continue forward and begin to spread laterally because the restrictive canyon walls are no longer present. The current will follow the present channel until it is filled up with sediment. As one channel fills with turbidites, the current follows the path of least resistance and abandons the old channel to begin a period of deposition in a new channel. This is called channel switching (Walker, 1984). Channel switching results in the formation of several finger-like extensions called lobes.

***Geologists care about this type of system because much of the world's oil and gas reserves are contained in the sandstones of a turbidite succession.***

P.S.  Why are there Turbidites exposed in southern MO, northern AR, and eastern OK? Well, the Ozark-Ouachita Highlands were, at one time, deep in the ocean between the N. American Plate and the S. American Plate.  As these plates collided, the rocks in my pictures were folded and uplifted to become a giant mountain chain.  Erosion has since reduced their size drastically.  Know you know.  See here.

Posted by Stephen at 9:07 PM No comments: