Just hearing the name brings to mind images of pharaohs, pyramids, camels, the Nile, and the vast expanse of the Great Sahara.  Myself, and a group of geologists went to Egypt to study this last thing...sand.  The purposes of the trip were different for each individual.  The main body of scientists were there to study linear sand dunes as an analog to dunes found on Titan, one of Jupiter's moons.  I was there, mainly, because I was invited!  Who could turn down a trip to Egypt?  I am very grateful for the opportunity to have gone.  I learned a great deal on the trip that applies directly to my thesis, and gained a new understanding of a different culture at the same time.

The original plan was to spend the majority of three weeks in the Sahara of western and southern Egypt.  This plan was greatly modified when we arrived and found that the Egyptian government would not allow us to go to the Sahara...they thought we were spies.  We spent a lot of time being tourists in Cairo waiting for permission.  Eventually we got sick of waiting and (against orders) travelled to the nearest linear dunes we could find, the Quattaneya Dunes just west of Cairo.

We ran ground penetrating radar (GPR) surveys over the dunes to image the interior surfaces.  GPR can "see" reactivation surfaces which represent changes in wind direction through time.  We were also able to image the extension of the interdunal deflation surfaces under the plinth of the dune.  This suggests that the dunes move laterally as well as lengthwise.  Chris Savage and I were the workhorses who did the dragging in the heat of the day.  Hey, we had to pay or way somehow!

We spent some time studying the ripples that formed on the sides of the dunes as well.  In the rock record, the laminations that are formed as these ripples migrate are called translatent lamina.  Sand that simply falls out of the air forms laminations called grain fall lamination.  If an avalanche occurs on the slip face (the part of the dune everyone loves to jump into) we call it grain flow lamination.  I thought it was interesting how these ripples had armored stoss sides from coarse grained sand and finer grained sand in the "inter-ripple" area.  The resulting laminations were really neat with a coarse-fine-coarse-fine pattern.  I have seen this in the eolian rocks of the Colorado Plateau.  Ralph Lorenz, one of the members of the expedition, took some time-lapse photos of the migrating ripples.

Tom Farr took GPS surveys perpendicular to the dunes to get their profiles.  You can see the main active part of the dune near the top and the asymmetry of the dune itself.  It's hard to get that kind of view from aerial photos or views from the ground.  A linear dune is, indeed, an active and ever-changing surface feature.

Finally, we collected some samples for optically stimulated luminescence (OSL) dating.  We wanted to understand how mobile the crests of the dunes were.  We are still waiting for the results of that work.  I was able to prepare the samples for dating in Logan, UT in the OSL lab at Utah State University.

Petrified trees in the interdunal areas of the Quattaneya Dune field. 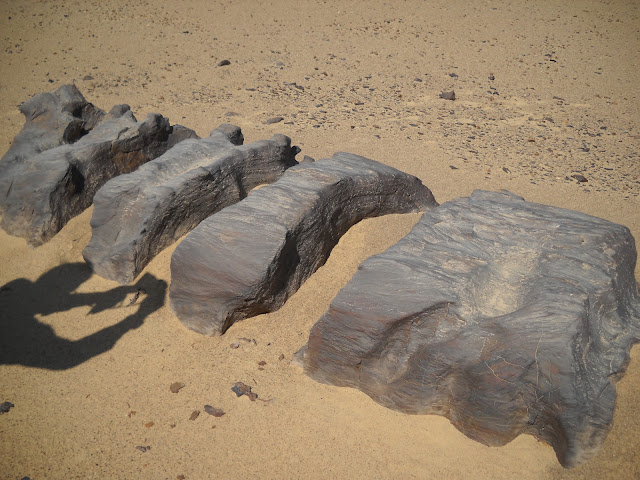 This limestone in the Great Sand Sea (we did eventually make it there...for a day) has literally been sandblasted.  You can see that the top part is more resistant than the chalky white bottom part.  Differing resistance to weathering was evident within these layers as well as evidenced by the fossils that stick out of the rock. 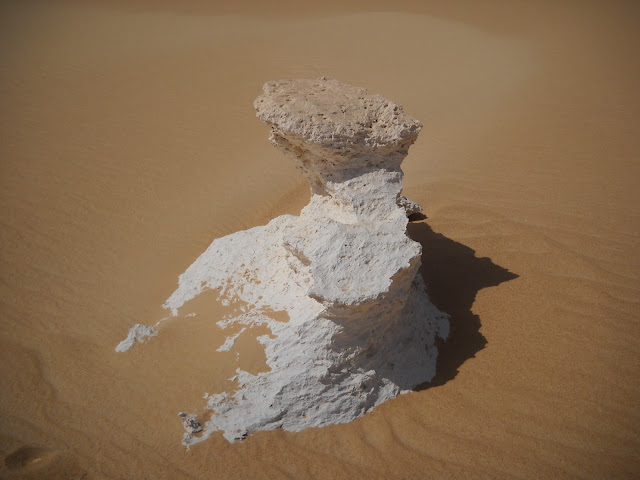 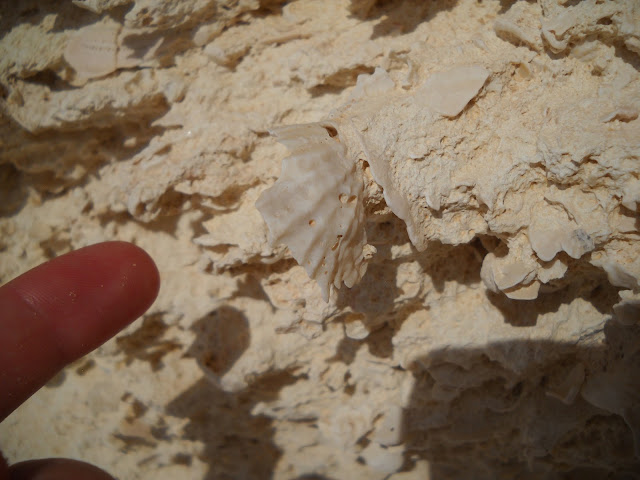 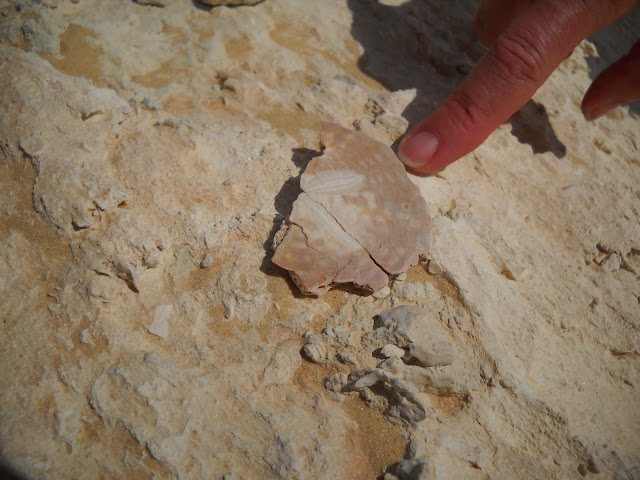 This rootlet graveyard was in an interdunal area in the Great Sand Sea.  The roots of plants that once lived here are long gone, but calcite that precipitated around them remains. 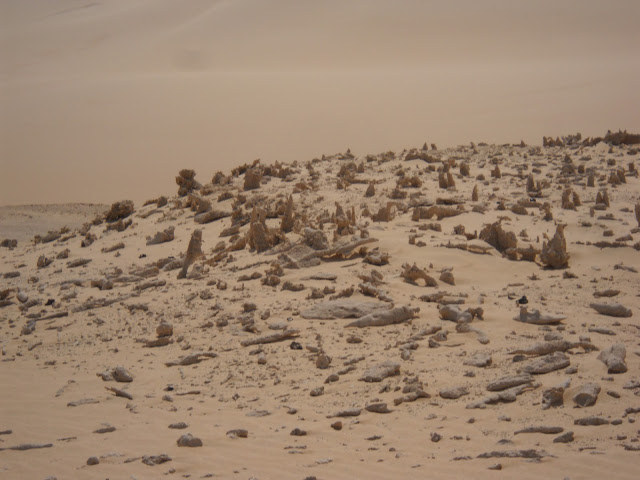 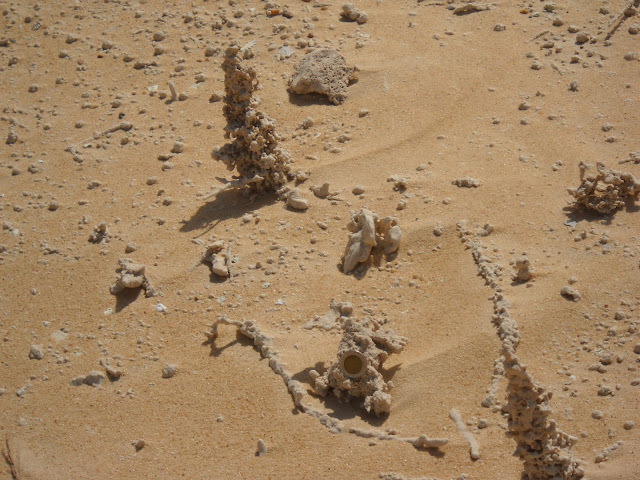 While science was the main objective of the trip, due to problems with our schedule, we got to spend quite a lot of our time being tourists.  Chris and I never really got used to the change in time from Mountain Time to Eastern European Time.  As a result, we spent our nights walking the streets of Cairo.  That might be semi-dangerous in major cities in the US, but in Cairo, people were just getting away from long days at work.  We met some amazing people who showed us around the area.  We spent time in Tahrir Square every night.  It was surreal watching the protests there only months later.

I could put a checkmark next to each of the things I listed at the beginning of this rambling story... 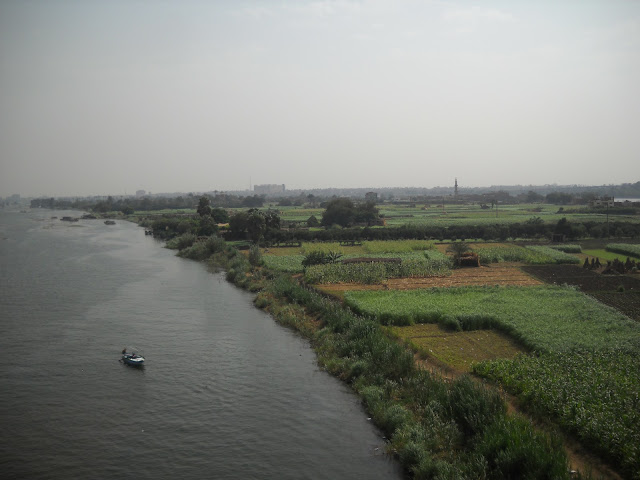 and the vast expanse of the Great Sahara. 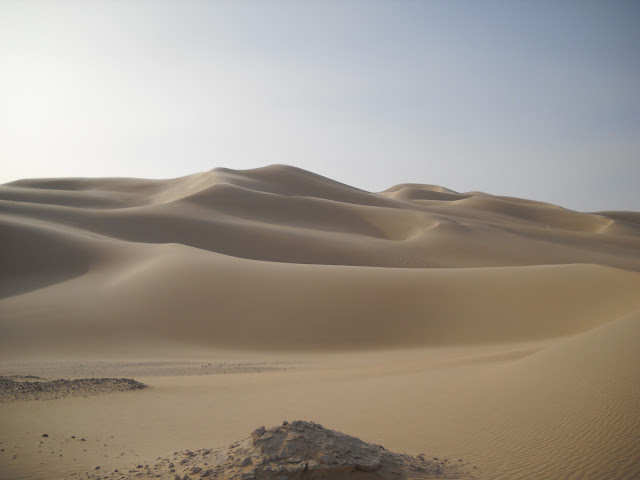 And, of course, the thing that America has given to the world...sadly. 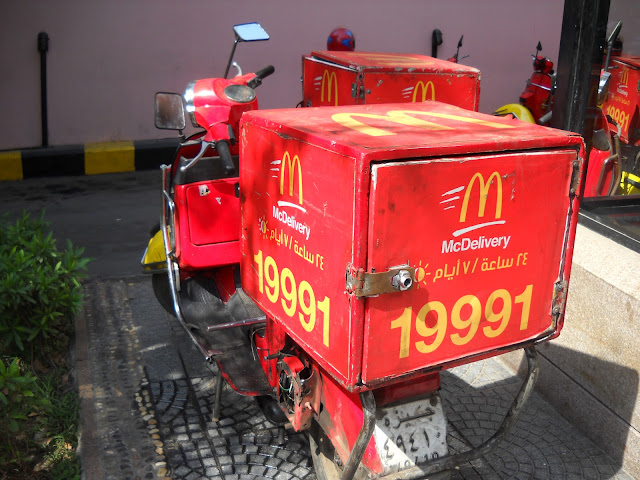 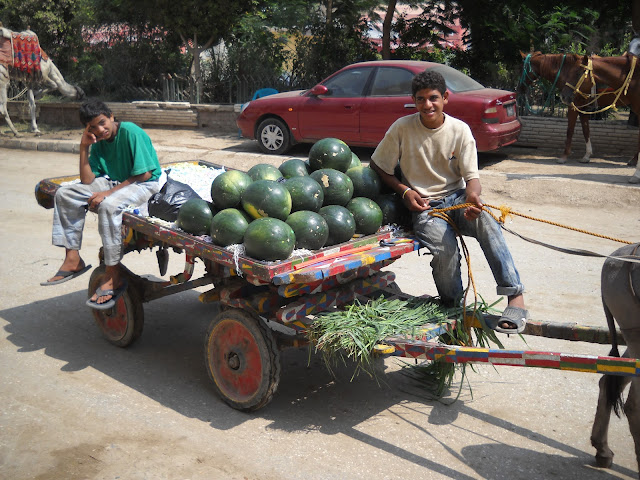 The Orthodox Church of Saint George in Coptic Cairo. 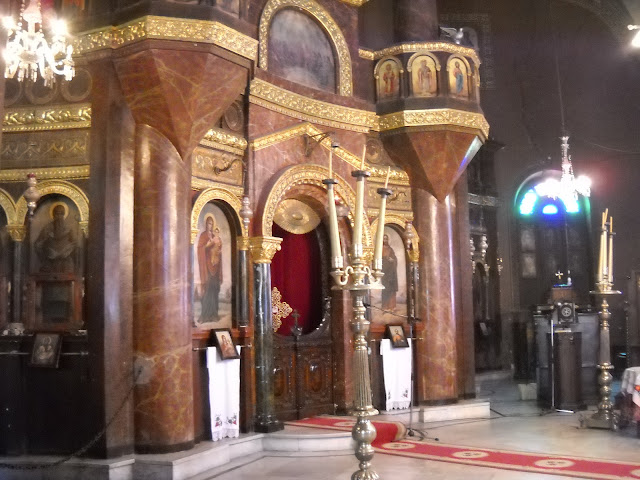 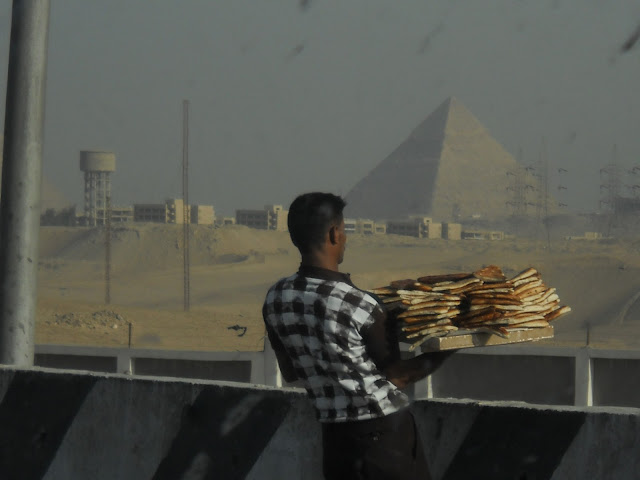 If a building remains unfinished the taxes are lower.  So the buildings remain unfinished.  You can see the rebar sticking out of the top of each building. 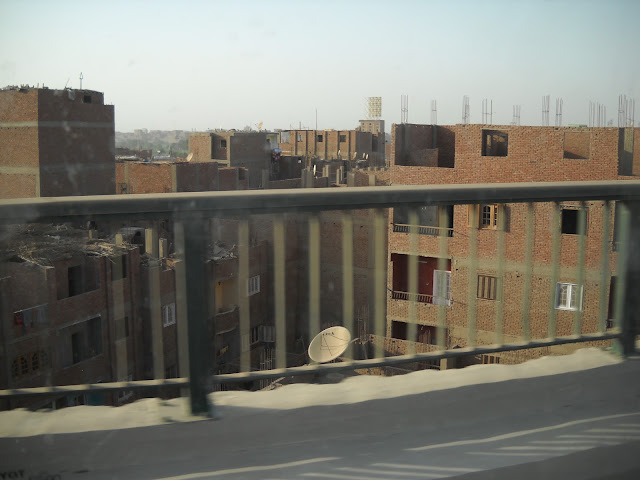 Mosque near Tahrir Square, Omar Makram Mosque.  We were invited in during the call to prayer and got to sit in the back while everyone prayed. 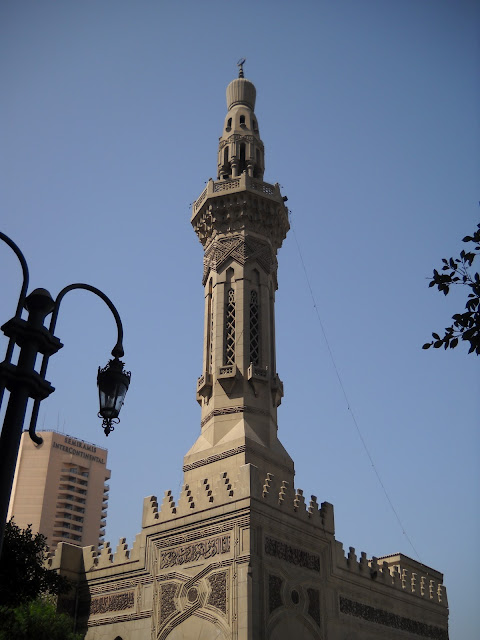 The oasis at Siwa Oasis at sunset.

The old part of Siwa Oasis.  The homes were literally built on top of one another. 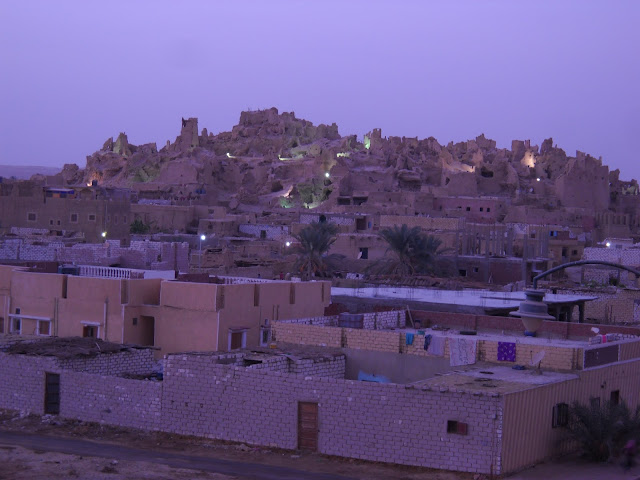 A warning for male smokers...if only we could put this on cigarettes in the US! 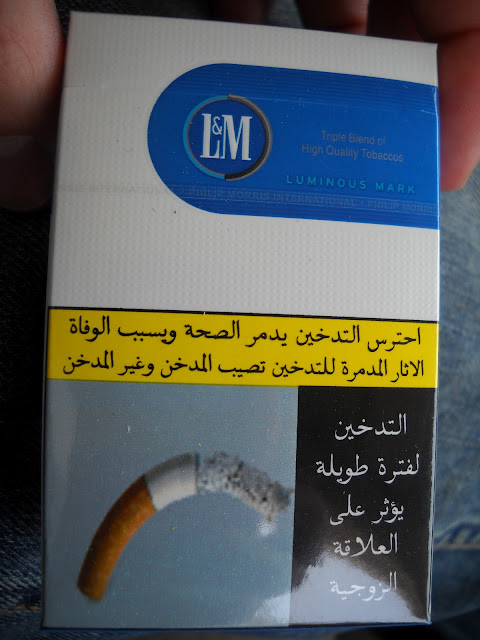