Cliff Jumping in the Ozarks

Why do boys and men need to do things that are dangerous, potentially life threatening, financially unwise, and certainly painful?  Because it is manly.  Cliff jumping is a perfect example.  It is hard to explain the way it feels to someone who has not jumped before.  It's like riding a roller coaster with no seat belt.  Peer pressure is the only reason 3/4th's (or more) of those who jump do so.  The lack of control after jumping can be somewhat liberating...the windmill arms tucked just in time to avoid bruises, the uncontrolled cursing, the fact that the whole world disappears as you focus on not dying, and the final inclusion in the group of elite jumpers who also made the leap.

The Ozarks is full of rivers carving away at the bluffs.  The crystal clear, frigid spring water allows you to see the rocks that could break your limbs, ...usually.  The Current River is a prime example of a place chock full of death defying cliff jumping experiences for my family and friends.  Numerous canoe trips transported us to the limestone walls up to 40 ft. high.  Here are a few pictures from that memory-filled country. 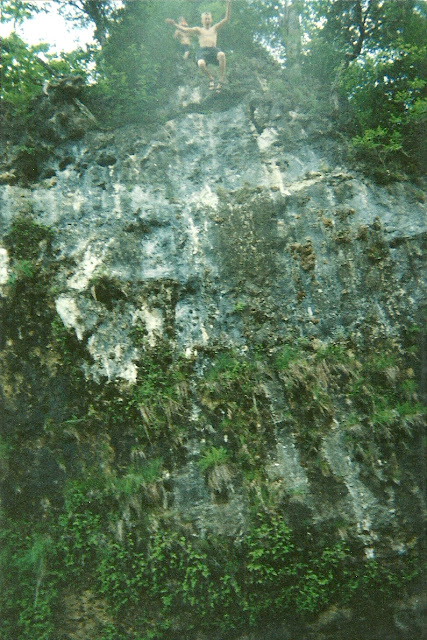 Beaver Lake is another prime cliff jumping location.  As kids we used to go to this lake and stay at our grandparents cabin.  They had a pontoon boat that we would tool around the lake in.  We never knew there were such wonderful cliffs over by the dam until a youth trip much later in life.  After the discovery, we took Darin and Billy to the spot and jumped.  Here we are at the top.  Notice the ledge under the water.  It would stink if you hit that!

Tucked away in southeast Missouri is this awesome little park.  It is known for its naturally shaped bathtub impressions in the rock of the stream bed.  You can lounge around in them all day.  Further down the stream is a magnificent cliff.  Perched atop this cliff is a sign that warns jumpers to cease and desist.  These next few pictures tell a story...

No article about cliff jumping would be complete without a piece dedicated to Lake Stockton.  The lake is man made and part of it is a flooded limestone quarry.  Cliffs extend almost 360 degrees.  It is cliff jumping heaven.  They go from a few feet tall to 40+ ft. depending on the water level of the lake.  Apart from the occasional submerged tree branch that wants to drag you under, or the large boulder left at the bottom of the quarry that wants to break your leg, or the poisonous water snake curled up on the exact rock you MUST use to get out of the lake, it is perfectly safe. (Side note: I took April here and kissed her beneath the trees at the cliff edge, ahem, moving right along...)

Well, I don't necessarily suggest that you go out and find a cliff to jump off of, nor do I recommend the opposite.  Each person must decide if they want to be a part of the fraternity of brave, manly, stupid, cliff jumpers.  Now that I am 30 years old, I think I'll become an emeritus member though.  My old limbs will not take too much of a beating anymore...then again I am going to the Current River soon.

No telling what might happen!
Posted by Stephen at 10:49 AM 9 comments: